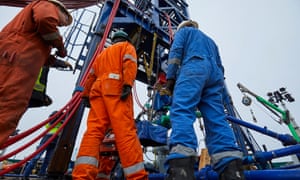 The government’s attempts to make fracking easier have received a setback after the high court ruled key aspects of its national planning policy to be unlawful.

In a case brought by anti-fracking campaigners, the court found that it was material to consider scientific evidence, including the effects on climate change, in deciding policy on fracking, and the government had failed to do so.

The judgment implied that campaigners could raise climate change as a reason to object to planning permission for fracking sites, which will make it easier for campaigners to lobby against licensing new sites.

Mr Justice Dove also criticised the way the public consultation was carried out, calling part of it “so flawed in its design and processes as to be unlawful”.

The judgment also suggested that gas from fracking might not be considered a low-carbon source of fuel, which could also hamper attempts to expand fracking around the country.

The government will now present its arguments on what changes may have to be made to the national planning policy framework, which sets out the rules by which local authorities can make their planning decision on individual sites.

Any changes to the policy framework could make it easier for environmental groups to argue against new fracking sites, which ministers wanted to prevent.

Joe Corre, founder of Talk Fracking, represented by Leigh Day solicitors, which brought the judicial review challenge to the government’s national planning policy framework, said the government had been exposed. “The court has clarified both that the government has behaved irresponsibly and recklessly with our democratic rulebook. Their pretend consultation was a farce. It has also become clear with guidance from the court that objections to fracking on the basis of its climate change impacts must be considered at a local planning level,” he said.

The case had two main strands:

Rowan Smith of Leigh Day called for a full review of the government’s policy framework.

Natural gas should not be considered a low-carbon fuel, as the government had tried to claim, added Jonathan Marshall, head of analysis at the Energy and Climate Intelligence Unit. “With the UK’s electricity system almost free of coal, natural gas is now effectively the most carbon-intensive major source of power,” he said. “Official advice from the Committee on Climate Change concluded that fracking was only compatible with national decarbonisation targets if the gas produced replaced higher carbon sources of energy.”

He also pointed to a recent study by the British Geological Survey that found elevated levels of methane near a fracking site, which he said showed the fracking industry was not living up to the standards we should expect.

Claire Stephenson, a member of Talk Fracking, said: “The government have continually sought to ignore public opinion on fracking, despite the overwhelming opposition on a national level.

“The lack of public consultation and the unbiased support for an industry, without any substantial underlying evidence, has been a cause for concern.

“The additional acknowledgment from the judge, that climate change is a valid concern for campaigners and councils facing fracking planning applications, is a big win.”

Fracking has restarted in the UK after a seven-year pause.

UNITED KINGDOM: A joint statement from social sector leaders on the right to campaign