What is "freedom of assembly"?

Freedom of assembly is the citizens’ right to publicly gather together to express, advocate and achieve shared needs. Assembly encompasses the right to express dissent through meetings, demonstrations, protests and strikes. This civil liberty is an essential complement to freedom of association and expression. Assembly is one of the citizens’ tools to engage with governing bodies, other forms of authority and multinational organisations. Indeed, assembly channels and magnifies the democratic will, including that of minority groups and urges interlocutors to take citizens’ perspectives into consideration.

“The ability to assemble and act collectively is vital to democratic, economic, social and personal development, to the expression of ideas and to fostering engaged citizenry. Assemblies can make a positive contribution to the development of democratic systems and, alongside elections, play a fundamental role in public participation, holding governments accountable and expressing the will of the people as part of the democratic processes”.

Governing bodies have the duty to provide a safe and empowering environment for people to come together and express their views. This responsibility includes ensuring access to public spaces, supplying protection in favour of and punishing violence against citizens exercising their freedom of assembly.

What are the main threats to freedom of assembly in Europe?

According to CIVICUS, emerging trends limiting the right to peaceful assembly include policing techniques such as the use of excessive or unlawful violence and undercover tactics, illegal or unreasonable refusal of authorisation to gather peacefully, denial of protection from violent counter-demonstrations.

In recent years, several European governments undertook anti-terror strategies that left legal loopholes failing to protect or even eroding freedom of assembly in the name of security of public places. These measures often led to a transfer of powers from the independent judicial sector to prefects and police authorities, who now have more discretion in regulating assemblies in public spaces. 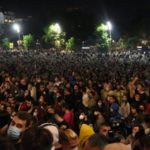