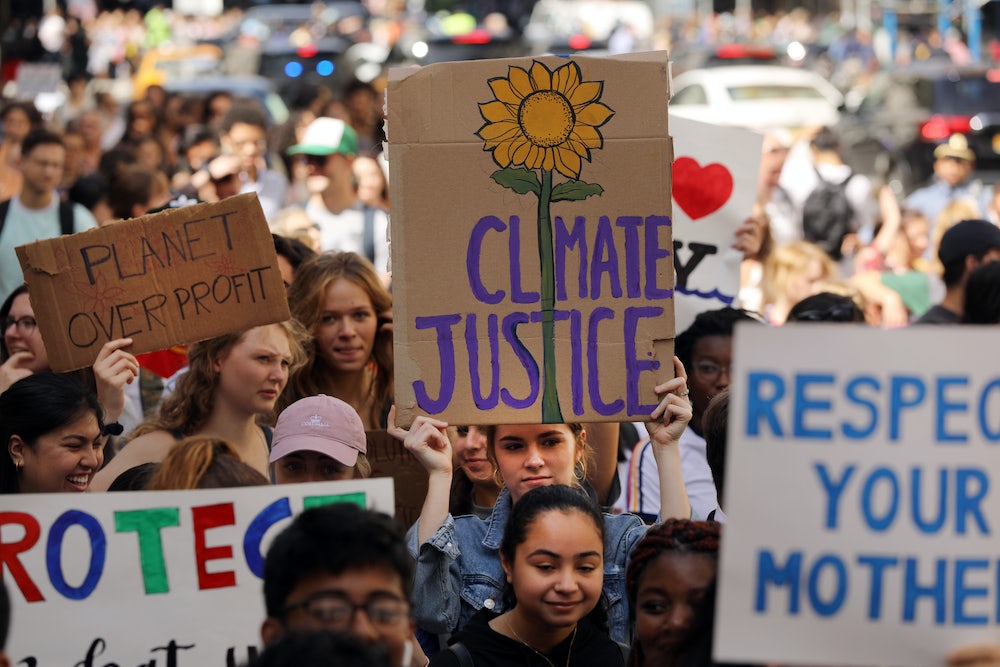 The United States’ climate movement emerged unexpectedly. Following a decade of Ronald Reagan and Gordon Gekko singing the praises of the free market, climate catastrophe joined the national conversation in the early 1990s. While warnings about global warming had emerged a generation earlier, the oil and gas industry had spent decades burying the data.

As a result, the climate movement of the ’90s wasn’t much of a movement. Its dominant theory of change assumed that, armed with sufficient data, elite institutions like legislatures, regulatory agencies, and multinational corporations would act in everyone’s best interest. But petrostates, and the U.S. in particular, balked at the idea of decarbonizing their rich, oil-soaked economies and militaries: While environmentalists’ efforts produced the 1997 Kyoto Protocol, the U.S. Senate in 2001 refused to ratify it. The George W. Bush administration, full of oil industry insiders, was disinclined to revive the treaty.

Around six years later, a new youth climate movement sprang up distinct from the big green nonprofits, coordinated in the U.S. by new groups such as 350.org and Energy Action Coalition, and looking more like an actual social movement. But its dominant theory of change still used institutional mechanisms like divestment and attempts to pressure climate negotiators at the United Nations, rather than more grassroots mass politics. In 2009, a coalition of multinational corporations and large environmental nonprofits led an effort to pass the dubious, serpentine Waxman-Markey cap-and-trade bill. While it passed the House of Representatives, it died in the Senate—doomed, some argued, by the absence of grassroots mass movements.

With rapidly rising emissions and swelling urgency, new movements have emerged since the end of Obama’s presidency, branching in two distinct directions. One branch includes organizations like Sunrise Movement, Fridays for Future, Keystone XL and Dakota Access Pipeline groups, 350.org, and Greenpeace (plus Extinction Rebellion in the U.K.). Their strategy involves tactics like occupying legislatures, organizing marches and protests, pushing corporate sustainability and divestment, and nonviolent direct action. The other branch includes the Democratic Socialists of America, unions, and politicians such as Bernie Sanders and Alexandria Ocasio-Cortez. This faction’s strategy is more traditionally leftist, using familiar tactics like organizing strikes and building labor and community power.

Today, the Green New Deal and a shared commitment to grassroots mass politics unite these two branches. Both confront the reality that capitalism, at least as it is currently practiced and defined, cannot decarbonize our economy and society. Both branches are more diverse than ever, more confrontational, and the scope of their vision is finally beginning to match the scope of the problem. The question is whether their current tactics alone are up to the gargantuan task ahead.

Modern mass movements—the broad mobilization of citizens and marginalized people to effect social change—emerged about 200 years ago alongside, and partly because of, fossil fuel–driven industrialization. The close, intimate working conditions in coal mines and factory floors, combined with low wages and poor—even brutal—working conditions, led to some of the first labor and social justice movements of the modern era, following from the ongoing abolitionist movement. These groups pioneered tactics like striking and nonviolent direct action, along with less peaceful demonstrations. In what was likely the nation’s first factory strike of the industrial period, women mill workers in Pawtucket, Rhode Island, set fire to a factory and won concessions from owners.

Past labor and social justice movements essentially fought to spread the spoils of a new fossil fuel economy more fairly. What the decarbonization movement must do today is, in a sense, the opposite: It must deny the spoils of a fossil fuel economy to everybody in order to preserve the planet’s habitability, while equitably sharing the fruits of some not-yet-conceived economy.

Decarbonization—that is, completely shifting the entire material basis of interconnected global supply chains and the world’s most sophisticated militaries in an age of unprecedented ecological and climate disasters—is a challenge bigger in scope and qualitatively different from any that have come before. Presuming we can simply replicate past labor or social justice movements to achieve it is reckless.

Practicing effective, activist mass politics in the U.S. is difficult: The nation has the world’s highest incarceration rate; a militarized police force eager to mete out violence on unarmed demonstrators; widespread voter suppression; prosecutors so vengeful that nonviolent climate activists were recently charged with crimes that could lead to 110-year prison sentences; and an economy that punishes even minor transgressions with lifelong unemployability, poverty, or death. Solidarity politics has been rendered similarly difficult by a long-running divide-and-conquer campaign funded by neoliberal institutions. Moreover, a government mediated by billionaire-controlled political and media infrastructures is perennially ready to undercut progressive politicians who rise too high. Even mobilizing to achieve the basic social safety nets the rest of the global north takes for granted has proved difficult in the U.S. And decarbonization is a much bigger lift.

Emissions rates are still rising, even in ostensibly leftist Nordic countries, such as Sweden, where environmental and progressive policies are comparatively easy to enact. The U.S. government is almost totally captured by a repressive, oil-obsessed administration, and even the opposition party is working hard to quell ambitious climate policy. Against such challenges, traditional leftist mass movement tactics, while important, are unlikely on their own to prove sufficient for provoking fast, sweeping social and political change. Strikes were designed to achieve a very particular goal: to win workers better wages and labor conditions. We shouldn’t assume that this very particularly honed tactic will automatically transfer to dismantling fossil fuel infrastructure. At this late and dire hour, movements will have to summon the courage and creativity of those who pioneered mass politics in the first place, by experimenting with new strategy and quickly deploying novel tactics.

What might novel strategy look like? The twin crises of global ecological collapse and climate disruption, and their only solution—decoupling worldwide infrastructure from a small suite of resources on which it is totally dependent—are conditions completely unprecedented in human history. It would be like building a movement to get the Roman Empire (and the rest of the classical world) to wean its economy off hydrological infrastructure or enslaved people, all while the Empire declined. There’s not one simple model we can point to for guidance. But there are examples that may offer some ideas and inspiration.

Anti-fracking campaigns are among the only examples of grassroots movements successfully keeping fossil fuels in the ground. This goal—forgoing accessible and profitable carbon energy—is critical and often overlooked. Even early Green New Deal drafts have omitted measures to “keep it in the ground.” Expanding renewable energy infrastructure is exciting, but it has to displace carbon energy generation or, with its manufacture and transportation footprints, it will simply add more carbon dioxide to the atmosphere. Even with the absolute rise in renewables, they still represent a meager portion of energy consumption (around 10 percent globally), and the economy is still hitting records in use of fossil fuels and emissions.

The anti-fracking movement in the U.S. gained ground in 2010 with Josh Fox’s Oscar-nominated documentary Gasland. The film presented, in stark and human terms, the visceral damage caused by gas drilling. The importance of emotionally provocative mass media to movement-building cannot be overstated, and it’s largely missing from today’s decarbonization movements. Gasland helped spark grassroots actions all over the country that forced prominent bans on hydraulic fracturing. The most notable, New York State’s 2014 statewide moratorium, has withstood several elite challenges. Governor Andrew Cuomo instituted the ban in response to, as Dissent put it, “a broad-based statewide campaign that drew in Occupiers and movie stars, lawyers and beer brewers, NGO staffers and political puppeteers.” The movement leveraged cultural icons effectively, gathering support from 180 artists, including Mark Ruffalo and Paul McCartney, and fused organized rural communities with the mass voting power of New York City to pressure the state government to maintain its ban. There wasn’t a central mastermind: It was a distributed movement led by people with skin in the game.

While mobilized for a cause most progressives find abhorrent, it’s also clear that the anti-abortion movement has been astonishingly effective at pushing a radical agenda—one, especially in the case of a blanket overturn of Roe v. Wade, with which a majority of Americans do not agree. Modern anti-abortion movements in the U.S., for about half a century, have found substantial success in holding elected officials accountable to their goals and in getting their grievance on many state legislative agendas: essentially, in making abortion a make-or-break issue for conservative elected officials, even at times when momentum appeared to be moving against their issue. The recent anti-choice movement has looked less like Koch-funded anti-climate campaigns—centralized, capital-glutted cephalopods of evil—and more like the dedicated, distributed movements climate activists will need to forge in order to force aggressive decarbonization. “The laws may appear to present a united front and a coordinated political campaign,” The New York Times reported of the many abortion restrictions passed by states in the last year. “Instead they reflect a sustained effort by a network of disparate activists, each with their own strategy honed over decades of work.” The model is one of many autonomous groups, all bound by the same simple and overriding goal, fueled by the same sense of moral righteousness.

When I asked Raphael Schlembach, a researcher focused on social movements at the University of Brighton in the U.K., for some ideal examples the climate movement could draw from, he pointed to another: the Rojava revolution, in which Kurds in Northern Syria have sought to build an autonomous region on egalitarian values. Emerging in 2011 from the Syrian Civil War, which is now thought to have been exacerbated by climate change, it was described by Vice as “the most feminist revolution the world has ever witnessed.” As The New York Times reported in 2015, “Rojavan women had been championed as leaders, defense of the environment enshrined in law and radical direct democracy enacted in the streets.” The ill-defined political entity, still unrecognized by the U.N. and NATO, is attempting to weave together ideals of environmental sensitivity, direct democracy, multiethnic pluralism, and a kind of libertarian eco-socialism into a new state. Whether this low-carbon, equitable model of governance will withstand Turkish invasions remains to be seen—and will probably depend greatly on future U.S. interventions—but it could provide an example of people coming together to find ways to live justly and sustainably in an ecologically compromised world.

Passing complex and visionary policy like a Green New Deal, sustaining decarbonization that could maintain a habitable earth, and achieving change at a scale never before achieved means not just matching the intensity and sophistication of past social and labor justice movements, but exceeding them and dreaming beyond current tactics. The challenge decarbonization presents is both politically and technologically unprecedented. We can look to examples for ideas and inspiration, but diverse, distributed decarbonization movements will probably need to adopt a variety of tactics, including new ones—and quickly.