The package of legal reforms adopted by the Spanish government severely undermines basic principles of the European Union. RIS has been denouncing for the past year, through the #WithoutJustice campaign, that these are not isolated actions but rather they are all part of a well-thought plan to leave us #WithoutJustice. With this new #EUTakeAction campaign, we raise our concerns to the European Commission.

We have been forced to call on the European Commission to take action, in the face of the ineffectiveness of existing mechanisms to prevent threats to the rule of law in Spain. Despite being blatantly contradictory to common EU values, many of the most problematic of these legislative reforms have been approved.

What are we denouncing and what do we request?

We denounce that the proposed reform to the Legal Aid Act limits access to justice and to effective judicial review. If the proposed reform is approved, fewer people will be able to benefit from the right to free legal counsel. The financial crisis has led to an increase in applications for legal aid. With the new law, access to this right will be curtailed. We therefore request the Commission to take measures to ensure that the new law is in line with the right of access to justice.

We challenge court fees for violating the principle of equality before the law. Even though natural persons are exempt from paying these fees to access justice—as of recent reform—they are still discriminatory, as they have a disproportionate impact on SMEs and some NGOs in comparison with big businesses (banks, insurance companies, etc.). In this regard, we ask the Commission to urge the Spanish authorities to completely repeal the act.

We denounce that the lack of judicial resources and political interference in justicehave an impact on judicial independence. It is clear that the proposed reforms to the Organic Law of the Judiciary and Criminal Procedure Act are partial and insufficient reforms; their removal is called for, since there has been no consultative process with experts or civil society with the aim of reaching an effective organization and modernization of the judicial system. Additionally, the Commission must ensure that the judiciary is properly resourced and that political interference is prevented.

We denounce recently passed laws that clearly violate the principle of legal certainty and respect for human rights, such as the new Public Safety Act and the Criminal Code. In this regard, condemnation is made of the threat that these laws pose to the rights of freedom of expression and assembly; the vagueness of many of the provisions of these laws, which can lead to the arbitrary application of sanctions; and the amendment legalizing summary returns from Ceuta and Melilla that directly contradicts EU law. We demand that all of these both laws be repealed.

Lastly, we challenge the legislative procedure used to pass the entire package of reforms, which did not respect a proper democratic process, since the government did not engage in a true consultation with civil society and experts in human rights. We request the Commission to remind Spain that any legal reform should be subjected to proper public consultation, carrying out impact assessments, ensuring cross-party consensus as far as possible as well as respect for the principle of legal certainty. 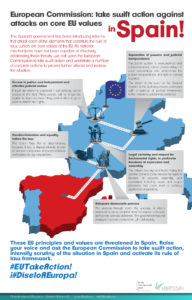 ITALY: In Como, You’re Now Forbidden From Helping the Homeless

CSE survey on cross border obstacles for not for profit associations